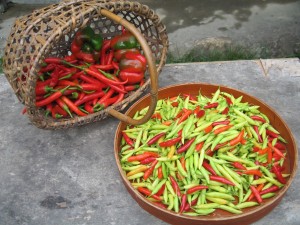 It’s October, but midday temperatures are still sometimes passing 30°, and Sunday is hot and sticky enough to bring ut a sweat just from loading the bags in the car. Are we going to get autumn at all before winter sets in?

The rice was cut weeks ago in Gifu, but golden fields of it are still standing outside Nagoya. By late afternoon at the house the temperature is just right and the insects are singing softly – maybe a bit subdued compared with a month ago. A deer cries somewhere in the woods.

There’s been no rain for the last couple of weeks and everything’s dry. There are still more delicious mini-tomatoes to be picked. There have been no bird, animal or insect attacks this year – why? Maybe because the skin is a bit tough?

I pick more chillies. The big “Malay” type have done well, but the “Ishigaki” plants are a bit smaller than usual. (Lack of rain? Not enough fertilizer?) They’ve made up for it by being extra hot. The persimmon tree’s branches are hanging down heavily laden with still-green fruit.

We drive home in the twilight, surrounded by the song of the crickets, the smell of “kinmokusei” and of woodsmoke.

We stay in Nagoya for the local matsuri. I can’t remember a thing about it now, to be honest…

Early October was like summer, but now it’s more like November: cold and wet. Last week typhoon 26 hit Izu-oshima and next Thursday or so #27 might do the same. It might also pass right through Nagoya…

The 20th is a “zero day” so the police are on special alert for traffic offences, but it’s pouring with rain so there’s no sign of them at their usual spot near Nagoya. The rice is still uncut in the fields, though bending low in the rain.

There’s whalemeat in the supermarket. This is actually quite unusual. Contrary to what some people outside Japan seem to think, and what some Japanese politicians would like everyone to believe, whalemeat is by no means a normal part of the Japanese diet. Just after the war it was sometimes all there was to eat, but that was true in the UK too, I think.

Monday is clear, fresh and beautiful! I pick what will probably be the last goya. The chillies are still doing alright, although growth is slower. There are only a few Habanero plants, but they’re looking quite healthy.

Kamemushi! The stinky insects are everywhere, looking for their winter quarters.

We’ve had a wet week with two typhoons in the neighbourhood but they both passed on Friday and since Saturday it’s been clear, sunny, cool and dry.

Just outside Nagoya they’re finally taking advantage of the sunny weather to cut the last rice. This was done weeks ago out in Gifu.

The leaves are starting to change colour. Cherry trees by the roadside have already shed theirs – they are one of the first to do so says T.

At the house it’s quite cold and soon gets dark, but the insects are still whooping it up outside. We have coconut milk nabe for dinner.

Monday is the same – the sun is warm, but as soon as it goes behind a cloud it gets quite chilly.

There are small yellow butterflies and tiny powder-blue ones.

The persimmons on the lowest-hanging branches are gone. Animals? There’s no debris on the ground, so maybe humans? Locals wouldn’t do that, so probably town people…

The chillies are nearly over. The Malay plants still look OK, but the Habaneros and Ishigakis’ leaves are pale with cold. 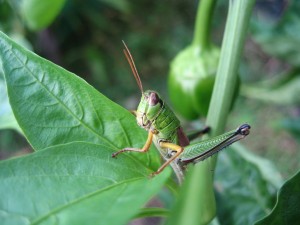 Ha! Already Christmas breathing down our necks, and you still haven’t been told about all the thrilling happenings out on the farm in October and November. Hmm… well, here’s a bit about October to be going on with.

On Sunday we drove up through ricefields bright yellow in the autumn sunshine, to be welcomed by the last movement of the insect symphony, along with some shrieking deer in the background. The deers’ mating call you hear at this time of year is not pretty at all – an unearthly banshee scream! That evening was clear and still; the stars wet and shimmering, draped across the sky like dewdrops on a spider’s web. A couple of little ones fell off in the ten minutes or so I was watching…

The next day was hot under the sun, but chilly as soon as it went behind a cloud. The kamemushi (“stink bug” maybe?) are all making a beeline for our house to find a winter home behind the curtains. OK till you find one and try to throw it out. They do stink. Oddly, the smell is not unlike coriander leaves, but if you dwell on that you could get put off Thai food. A dying wasp in front of the house. A few years ago, one got into my wellington boot and with its last gasp managed to sting me on my toe, somewhat to my discomfort… The show is slowly closing down for the Winter.

On the radio I heard that the Orion meteor shower was starting.