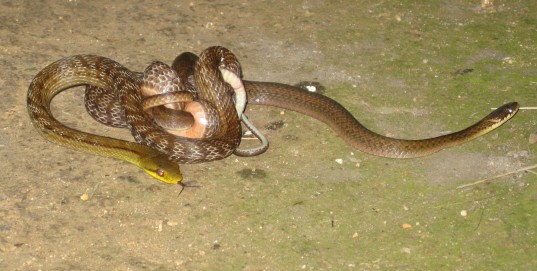 There are quite a lot of snakes in Japan; mostly they keep to themselves, to our mutual relief, and only a couple are poisonous: the deadly Habu in Okinawa, and here in mainland Japan we’ve got the Mamushi, a kind of adder, which is only dangerous if you don’t go straight to a hospital after being bitten, and the Yamakakashi which was thought non-poisonous but turns out to have venom in its back teeth… The only time you might run into one is in the Spring, when they’re warming themselves in some sunny spot and still too drowsy from hibernation to get away.

A few weeks ago I lifted up the shutter of our garage in Nagoya to see a big snake was sitting on that ledge at the bottom, so had been raised right to eye level… I think (hope) it was a harmless Aodaisho. Then last week out in the country there were the two snakes in the photo coiled up in front of our back door. One larger one with dark patches, and a smaller smooth brown one. I’m presuming the larger one was a female. but they might just have been two different species. It looked as if they were having Snake Sex, with lots of writhing, biting and coiling – very passionate. When they noticed we were looking the female grabbed the male by the head, dragged him to a slightly more secluded spot and ate him. Just swallowed him whole, from the head. I was so surprised that by the time I thought of going back to get the camera again there was just an inch or so of tail sticking out of her mouth. She then raised her head, gave us a defiant look and slid off into the bushes to sleep for a few days I suppose.

This site uses Akismet to reduce spam. Learn how your comment data is processed.